How To Protect Against Ram-Raid Attacks 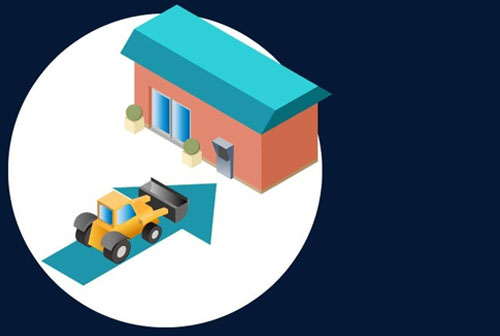 The rising threat of ram-raid attacks

Over the last few years, there has been a disturbing increase in the number of ram-raid attacks in the UK, with weekly reports of shops and cash machines being targeted by criminals.

This rise in ram-raid attacks is having a significant impact on businesses, with the Association of Convenience Stores finding in 2019 that of the 7,030 convenience stores surveyed, 353 ATM ram raids had been recorded in the last year.

While another report found that in 2017, including repairing targeted sites, replacing ATM’s and the money stolen, the direct cost of ram-raid attacks overall was estimated at £47 million.

This isn’t a problem limited to the UK, with the latest figures from the EAST, showing that 10 countries reported ram-raids and ATM burglaries, with 4 reporting that such attacks are increasing.

What is a ram-raid attack?

Ram-raiding is a technique used by criminals, where a vehicle is used to penetrate a shopfront or an ATM cash machine allowing them to loot the goods.

Almost any kind of shop can be targeted, with recent news reports showing jewellers, supermarkets and high street stores being hit by ram-raids.

The type of vehicle used in these attacks can be anything from a motorbike to a JCB, as long as it can effectively smash the doors and windows of a shop or penetrate an ATM.

Ram-raids aren’t limited to cities and towns and in recent years rural areas have become increasingly targeted by these kinds of attack.

These kinds of attack are usually very quick, with some reported as taking as little as 60 seconds for the criminals to be in and out with the goods. 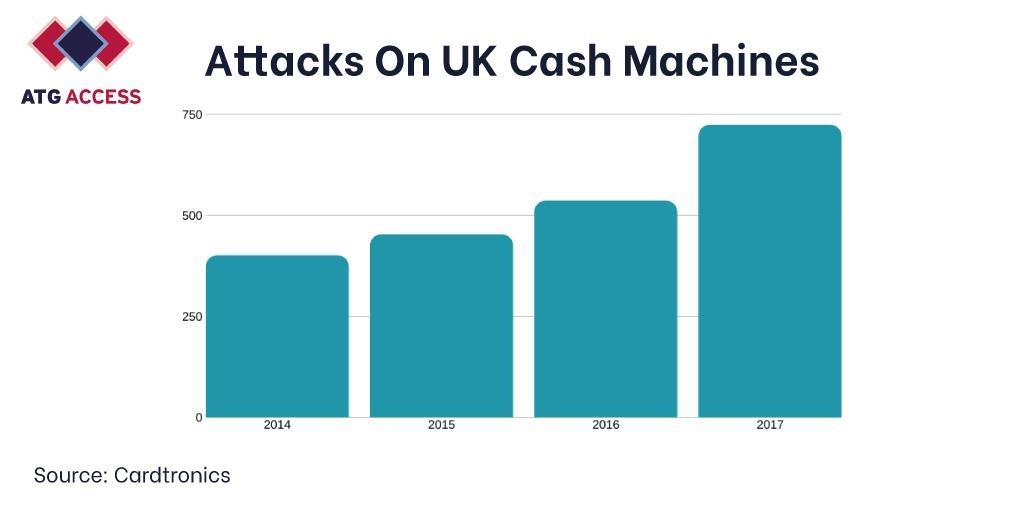 Shops and ATMs aren’t the only sites at risk with warehouses having also proved prime targets for ram-raid attacks in the past.

One such incident in Runcorn in 2018, saw criminals reverse a Ford Transit through a roller shutter door at a warehouse to make off with a number of items.

Even stadiums aren’t above being targeted, with Arsenal’s shop infamously being targeted in 2017 by a group of criminals on motorbikes who made off with thousands in merchandise.

How can you protect against ram-raids?

When it comes to protecting your site against ram-raid attacks there are a few options available to you.

The first is to put in a physical deterrent such as a row of anti-ram bollards or barriers in front of the shop or around the cash machine. 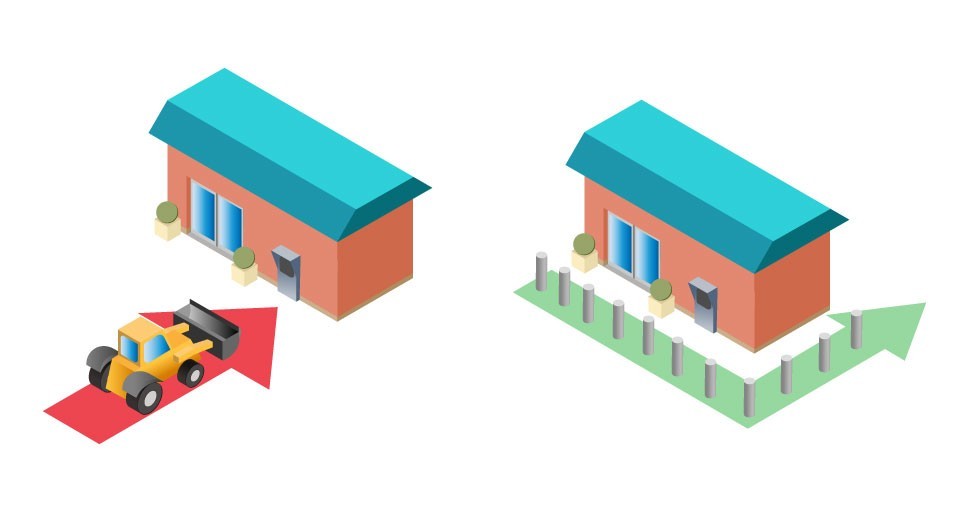 Not only do these solutions provide a physical barrier, but can also be an important visual deterrent, making criminals think twice about targeting the site.

The other option is to have a security guard or security team on site, however this might not be the most cost effective option, especially for the smaller shops or sites that may be targeted.

Having CCTV in place could also help police identify the criminals in the event of a ram-raid attack.

What is an anti-ram raid bollard?

Anti-ram bollards such as ours, are a heavier duty option than your average bollard, with a greater wall thickness.

The increased wall thickness makes them less susceptible to denting or bending if knocked by accident by a trolley or vehicle.

This helps maintain the aesthetics of an area for longer than thinner walled products which tend to look damaged and scratched in no time at all.

These bollards are also usually larger, with an increased height and diameter making them a more visually imposing deterrent to criminals.

You’ll find that some anti-ram raid bollards are tested to the BSI PAS 170 impact test standard, which has been designed specifically for protecting against low speed impacts and criminal attacks.

PAS 170 bollards are capable of stopping a 2,500kg vehicle travelling at either 10mph or 20mph. For more information on PAS 170 read our complete guide to the standard.

For bollards tested with larger vehicles at higher speeds you would need something with a PAS 68 rating, which are usually utilised for counterterrorism and critical infrastructure protection.

What types of anti-ram raid bollards are there?

Anti-ram or ram-raid bollards come in a variety of different types and which one you need will depend on what you’re trying to achieve.

Anti-ram raid telescopic bollards as the name suggests are ram-raid bollards that can be manually retracted into the ground.

Due to the heavy-duty design of these bollards, they are fitted with a lift assist mechanism which reduces the lifting weight of the bollard by up to 60%.

These are a great choice for providing protection to sites where vehicle access is also required on a regular basis.

If you’re looking for a crash-tested solution, our SP100 Retractable Bollard is PAS 68 rated, capable of stopping a 3,500kg vehicle at 30mph.

Fixed or static anti-ram bollards are rooted in the ground and as such should be installed in areas where vehicle access is not needed.

A row of these bollards makes an excellent line of defence to protect a storefront or ATM.

For added security we have a range of PAS 170-rated fixed anti-ram bollards which have been impact-tested, and are capable of stopping a 2,500kg vehicle at either 10 or 20mph.

Removable ram-raid bollards allow you to remove the post from a socket when you need to grant access.

This makes it ideal for sites when occasional vehicle access is needed, or sites with a high water table where a telescopic bollard would have difficulty operating.

When it comes to ram-raid bollards, for non-tested products we recommend a spacing of 1.4-1.5 meters, centre to centre.

For our PAS 170-rated bollards in order to comply with the product’s certification, the bollards need to be spaced at a maximum length of 1360mm or 1330mm centre to centre.

For products that have been tested to PAS 68, it is recommended that you give a maximum air gap between the bollards of 1.2m.

If you need help determining how many bollards you need to secure a site, send a picture to enquiries@atgaccess.com and one of our experts will be able to assist.

If you would like to learn more about the PAS 170 or PAS 68 impact test standards, you can read our full guides here: