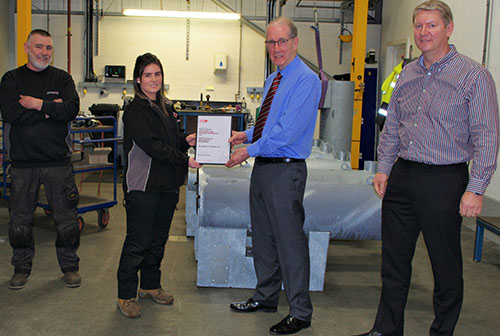 Rebecca was up against some stiff competition with six other candidates also having been nominated for the award shortlist which took place at the Hilton Doubletree Hotel in Chester. 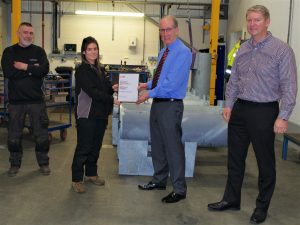 Joining a fast-paced environment was daunting. Rebecca’s tenacity and determination to learn saw her flourish and become a core-member of ATG, instilling passion and enthusiasm into her everyday working life.

Reportedly so shy, Rebecca used to faint when asked to speak in public at school. Having grown in confidence with ATG, she successfully presented in front of 200+ people at her college.

Throwing herself into every possible development opportunity, above and beyond her apprenticeship role, Rebecca focused on becoming multi-skilled. This included qualifying to drive a forklift truck, taking a side interest in the ATG design process; spending time in the mechanical design team, learning the full-turnkey process, driven by her own curiosity and tenacity.

During a period of growth, Rebecca was approached to run some final assembly shifts. Picking things up quickly, Rebecca ran the station with confidence and to an incredibly high standard. Now directing those same high standards to complete engineering change projects – rectifying engineering flaws and updating core technology, running these projects as part of her college portfolio. This involved both final assembly and mechanical design, two skills Rebecca has perfected.

Another consequence of growth was that the production was at full capacity, resulting in the requirement to reconfigure the existing assembly environment. Rebecca worked on this project to assist in re-designing the final assembly area. Rebecca’s input helped create a more suitable space to assemble products to a consistently high quality, increasing output resulting in; quicker lead times and more stock being built to furnish website sales – capacity has increased by 30%.

Skills and knowledge gained from throwing herself into extra projects allowed Rebecca to join a team travelling to Qatar, overseeing the assembly of crash tested bollards. The project was the largest automatic bollard project supplied by ATG Access, involving 257 units. Rebecca worked on-site with ATG’s local representative, ensuring that products supplied were correctly assembled and fit for installation. Rebecca excelled.

Recent projects have involved complex assembly of a bespoke product designed for a high profile, governmental project in Europe. Rebecca played a pivotal role, putting into practice her knowledge, delivering from design through to site implementation and test.

Rebecca also played a supporting role as part of an HPU development team. Rebecca’s structured approach was invaluable, recording data and documenting tests, allowing ATG to make informed decisions on the development process. Rebecca made significant personal development during this process too starting from little knowledge in this area of engineering to, a year later, having an excellent understanding of hydraulic systems.

ATG runs an ‘Employee Appreciation Day’ annually and Rebecca received a commendation. Colleagues describing her as “invaluable,” “able to turn her hand to anything she is asked to do, always with a smile on her face”.

Rebecca is very focused, having wanted to be an engineer since she was 6; now, a credit to ATG. We are delighted to have such a competent, female engineer to inspire our future apprentices.