The New Balance: Security Design in the Middle East 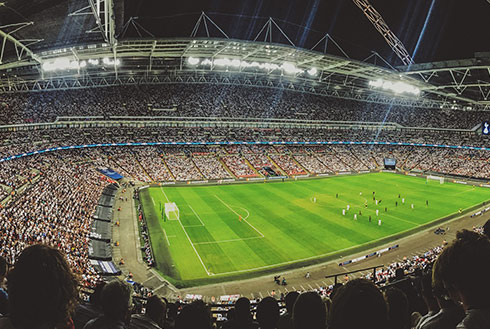 This year’s history-making World Cup has all eyes fixed on the Middle East – specifically, the gulf peninsula nation of Qatar.

Although not without controversy, there’s little doubt that the 2022 FIFA World Cup is inspired. It has gone where no global event (or Arab state) has gone before. It has also inaugurated a new model of physical security, centred on international collaboration of staggering scale, whereby skill, hardware, and technology are loaned for the event’s duration.

On analysis, it’s not wholly surprising that the Qataris have chosen the bold and uncharted path. Because for all the football, debate and celebrity, the Qatar World Cup is, in essence, about security. After all, combine a global sporting event with an unprecedented influx of people and [unfamiliarity], and successful security delivery quickly becomes your number one priority.

Qatar’s ambitious security approach has encouraged the industry to think more broadly about security infrastructure in the gulf states. Specifically, the drivers and the necessities of getting security right.

Here, we examine the state of security design in the Middle East and why mastering the art of balance is crucial in such diverse, dynamic, and demanding territories.

The Changing Face of Security in the Middle East

The Middle East is unlike any other place on earth. The region is changing at breakneck speed thanks to natural resource wealth. It is home to elaborate mega-projects and futuristic cityscapes interwoven with construction sites. Its fabric is a high density mix of heavy industry, tourism, transport & logistics and ancient heritage. And it navigates significant geo-political tension.

These regional characteristics have borne a heterogeneous market with unique security circumstances. For example:

So, how do you achieve successful security against such a complex backdrop? Balance may well be the answer.

The Best Security Boils Down to Balance

There are three critical principles of security design: process, people, and proportionality. Achieving a balance between and within these principles is vital to well-functioning, secure infrastructure against the gulf’s complex backdrop. And depending on your perspective, achieving infrastructure security balance in the Middle East should be straightforward or nightmarishly complicated.

In theory, specifying security in the gulf states should be easy. Most projects break ground on virgin land with all requirements known. On the other hand, if some security aspect is overlooked during planning or security is considered later in the project, corrections can be painful. Moreover, the aesthetic, technologically advanced nature of new Middle East developments makes retrofitting costly and descriptive.

Getting it right all boils down to balance. So, let’s take a closer look at those three principles.

The Three Most Important Principles of Security Design

In the context of security design, process refers to the trifecta of security, aesthetic, and user considerations that guarantee a project’s suitability and justify its cost.

Architectural value must be perfectly balanced with defensive integrity and real-world application. This balance will differ depending on the project’s specified environment and, crucially, the user’s interpretation of and demand for security visibility. For example:

Look at any successful security project, and you will note that its people worked collaboratively – and did so from the project’s inception.

The earlier that all parties are engaged – architects, developers, security consultants, utilities, technologists, and solution providers, to name a few – the more advantageous that will be to a project. Working in sync ensures that critical balance is built and that security can be engineered by design, resulting in smoother projects and more resilient, profitable results.

The final principle of effective security design is proportionality – a balancing act by nature! Security consultants must work with developers and architects to agree on a project’s threat vs risk score to guide the balance between aesthetics, usability, and security robustness.

Let us use Qatar as a hypothetical example. Qatar considers itself a safe country regarding terror attacks – the last attack on its soil was in 2005. Therefore, a shopping centre development could be rated low threat-high risk, given the human impact of a successful hostile vehicle attack, for example.

Obstacles to Security Design Balance in the Gulf

To briefly return to an earlier point, no region on earth compares to the Middle East. Driven by dreams and with capital to invest, the infrastructure growth in many gulf states is outpacing processes and sometimes education around what effective, aesthetic security can be.

The reality poses a challenge to those specifying new developments – particularly regarding security design. Today’s threats are a moving target. That means standards, certifications, and solutions evolve rapidly to match.

And then there’s the increasingly dream-like architecture emerging from the wealthier gulf nations. Project leaders must balance aesthetic vision, security and user experience. But to what extent is that possible? Must inspiration be capped to guarantee security?

Security specialists don’t believe so. However, they recognise specific obstacles that may prevent the Middle East from achieving the desired balance in its security infrastructure. These are broadly considered to be:

The Land of Uninhibited Imagination

The next step for security design in the Middle East is understanding that security can be inspirational, too. But, unfortunately, security is too often considered a restrictor in the land of unfettered imagination and uncompromising infrastructure progress.

However, when approached with expertise, commitment and, most importantly – balance – security design is an opportunity to be incredibly creative and set a new global model.

To achieve this, the gulf states need access to high-performing, highly-certified products tailored to the region’s impressive architectural innovation. And, of course, skilled, experienced people who appreciate the need for balance and know how to achieve it in security design.