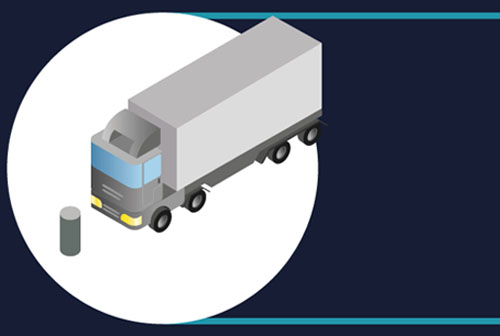 If you’re looking for bollards, road blockers, or vehicle barrier systems you may have come across the term IWA 14, but what does it mean?

IWA 14 is an impact test standard detailing the method and means of measuring the performance outcome for impact-tested vehicle security barriers (VSB).

Originally published in 2013 the IWA 14 standard draws on elements from the other two major impact test standards, PAS 68 and ASTM. These are the most common standard you will find for hostile vehicle mitigation (HVM) bollards, blockers, and barriers.

As one of the organisations involved in the development of IWA 14, we’ve put together this guide to help give you a better understanding of the standard.

Inside you can find an explanation of IWA 14 and the standards history. The guide will provide you with a walkthrough of an example product rating, explaining each section so that you can easily interpret the rating code in the future.

IWA 14 was designed to be considered the ‘world’s impact test standard’ with input from the Centre for Protection of National Infrastructure, British Standards Institute, the US Department of State, and others.

What does IWA 14 stand for?

IWA stands for ‘International Workshop Agreement’ and is overseen by the International Organization for Standardization (ISO).

Okay now you know what it stands for, but what exactly is an ‘International Workshop Agreement?’ Unlike most documents overseen by the ISO, the IWA 14 standard was developed outside the usual committee system.

This allowed key industry players to negotiate in an open workshop environment allowing them to shape the IWA standard.

The diagram below shows the steps needed to develop an international workshop agreement.

Making sense of the IWA 14 rating

When you first see the string of numbers and letters that make up the IWA 14 impact test rating, it’s not exactly clear what you’re looking at.

For those of you who are familiar with PAS 68 or have read our guide on this British impact test specification (sometimes referred to as a standard) then this code will be familiar to you. Though you may have noticed a few key differences.

As with our previous guide, the best way to explain the IWA 14 rating is to break it down, step-by-step.

For this, we will be using our Centurion Shallow Mount Bollard as an example as it has been fully certified to the IWA 14 standard.

Similar to PAS 68, the IWA 14 rating starts with the type of test that was conducted, which, in this case, was a vehicle test. This means that an actual vehicle was crashed into the bollard to certify the product.

IWA 14-1 differs from PAS 68 in that vehicle tests are the only method used, while PAS 68 also allows for simulated and pendulum tests.

Next, we have the type of vehicle that was used for the test. This section shows the vehicle type and the mass of the vehicle.

As with PAS 68, the vehicle weight is measured in kilograms, so taking our Centurion shallow mount bollard as an example, it was tested with a 7,200 kg vehicle.

Depending on the test, the vehicle being used can range from 1,500 kg at the lowest weight to 30,000 kg at the highest.

If you are familiar with PAS 68, this may be where you notice the first difference between the two ratings. With IWA 14 you can see that instead of 7,500 kg, the vehicles used are 7,200kg.

IWA 14-1 has a larger number of vehicle categories than either PAS 68 or ASTM with a total of nine types of vehicle.

Below you can see a vehicle classification chart detailing the different classes of vehicles that are used for testing IWA 14 products. 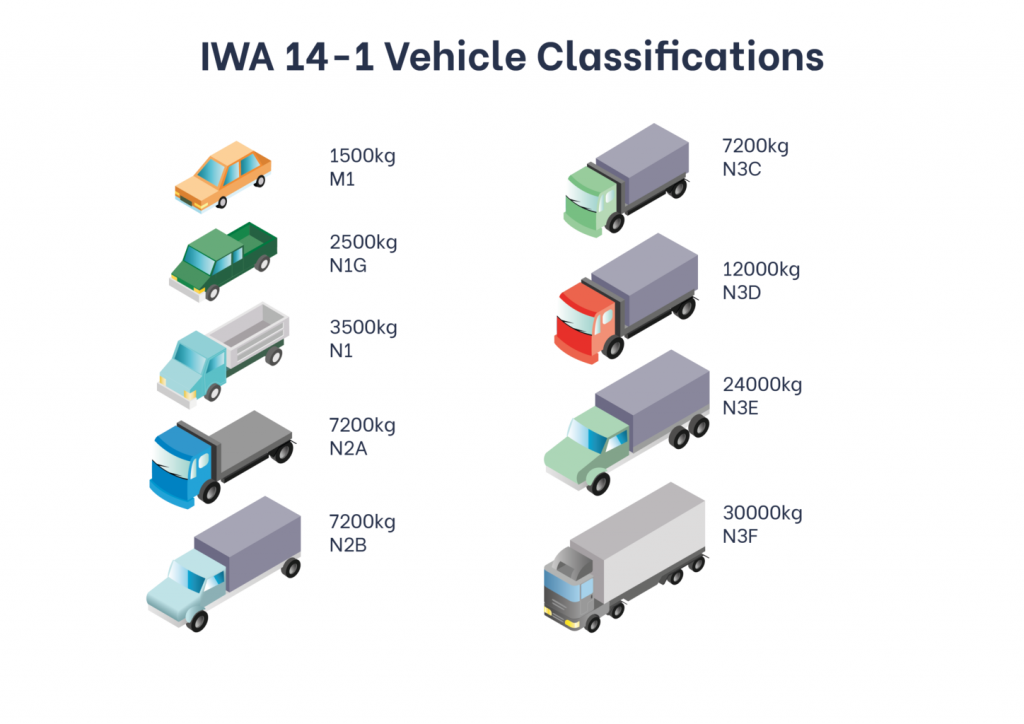 After the vehicle type, you have the test speed which indicates the speed in kilometres per hour (kph) that the vehicle was travelling at for the test.

In our example of the Centurion bollard, you can see that it was tested at a speed of 80 kph (50 mph).

You may be asking; how do I know which rated product is right for me? Well, in most cases the product rating you need will be determined by conducting a ‘dynamic vehicle assessment’.

These assessments will usually be carried out by a certified security consultant or a Counter Terrorism Security Advisor. A VDA will help identify the vehicle threat and establish its max velocity of attack.

Next, you have the angle that the vehicle impacted the product, this will usually be 90° however you will sometimes see 30° and 45°. The 30° and 45° test certifications are sometimes requested when installing products into scenarios with a shallow angle of attack such as a bridge deck or for testing fences.

You also need to be careful as some products will be directional and may perform at 45° but not at 225°.

The impact penetration figure shows how far in meters the load-carrying part of the vehicle travelled past the VSB datum line. The datum line is the point from which vehicle penetration is measured. For the IWA 14 standard, this is the front of the product as can be seen in the diagram below. 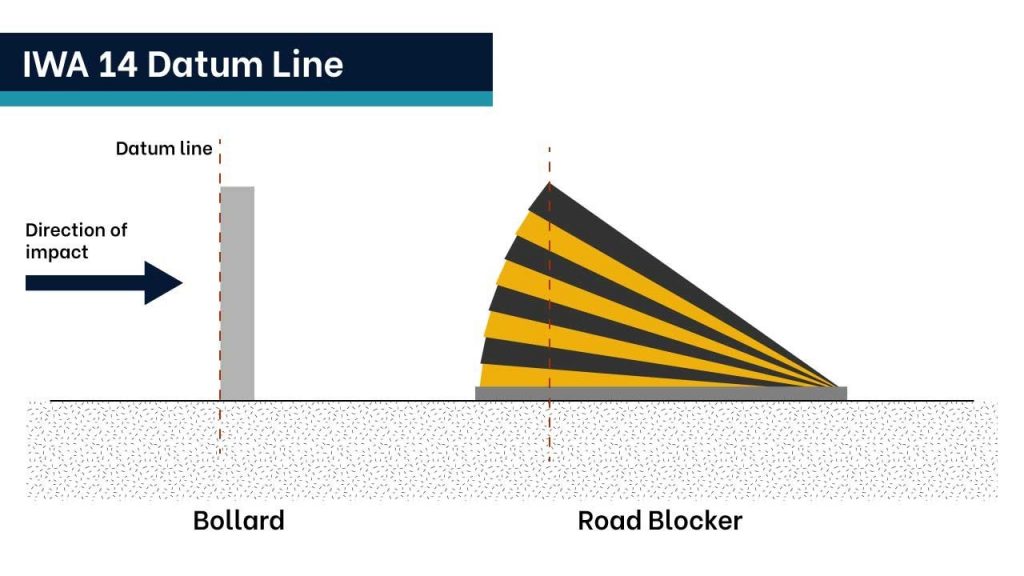 This is another area where IWA 14 differs from PAS 68, where penetration is measured by how far the load-carrying part travelled past the back face of the product. For products such as wedge road blockers, this can represent a considerable difference.

Looking at our example, our Centurion bollard achieved a penetration rating of just 1.9 meters. The level of penetration considered acceptable can vary depending on the perimeter line in relation to the asset that you are seeking to protect.

How does IWA 14 differ from the other standards?

If you’re familiar with PAS 68 or have read our guide, you may have noticed that the IWA 14 rating doesn’t include debris dispersion. The major debris dispersion measurement showed the furthest point that debris weighing over 25 kg travelled after the impact.

This is included as part of the PAS 68 rating to help security engineers to visualise the test. However, in the past, this has caused some confusion and so was removed from the IWA 14 standard.

IWA 14 also differs in its testing conditions. With ASTM the products need to be installed in low cohesive compacted soil, while PAS 68 doesn’t define a soil type for products being tested in conditions appropriate for use. IWA 14 on the other hand, allows for both in-soil or site-specific installation for the test.

What about the other standards?

Now that you are familiar with IWA 14 you may want to know more about the other impact test standards that you may come across. The other two major standards you will come across are PAS 68 and ASTM. PAS 68 which shares a lot of similarities with IWA 14 is the British testing specification for hostile vehicle mitigation and is explained in full in our definitive guide.

A more recent addition in PAS 170-1 is for impact testing bollards at a low speed with a 2,500kg impact trolley. PAS 170 is aimed at offering protection from vehicle threats from criminality and accidental impacts. You can read more in our PAS 170 guide.

ASTM F2656/F2656M is the US standard for crash testing security products. ASTM stands for the American Society for Testing Materials and serves a similar role to the BSI. You may also come across DOS (Department of State) which is the old US standard and has now been superseded by ASTM. We will be covering this standard in a future guide.

The final standard you may also find is CWA which is a European workshop agreement that combines elements of PAS 68 and PAS 69. PAS 69 is the specification for correctly installing impact-tested products.

If you would like to learn more about the various standards or hostile vehicle mitigation as a whole, we recommend reading the Centre for Protecting National Infrastructure’s (CPNI) guide.